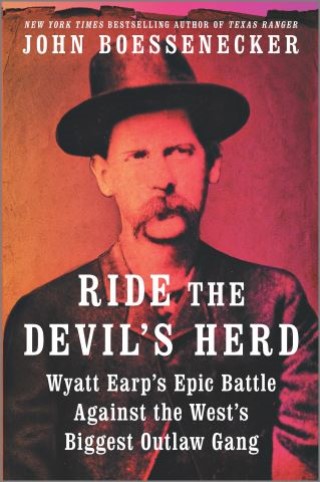 The little-known story of how a young Wyatt Earp, aided by his brothers, defeated the Cowboys, the Old West’s biggest outlaw gang.

Wyatt Earp is regarded as the most famous lawman of the Old West, best known for his role in the Gunfight at the O.K. Corral in Tombstone, Arizona. But the story of his two-year war with a band of outlaws known as the Cowboys has never been told in full.

The Cowboys were the largest outlaw gang in the history of the American West. After battles with the law in Texas and New Mexico, they shifted their operations to Arizona. There, led by Curly Bill Brocius, they ruled the border, robbing, rustling, smuggling and killing with impunity until they made the fatal mistake of tangling with the Earp brothers.

Drawing on groundbreaking research into territorial and federal government records, John Boessenecker’s Ride the Devil’s Herd reveals a time and place in which homicide rates were fifty times higher than those today. The story still bears surprising relevance for contemporary America, involving hot-button issues such as gang violence, border security, unlawful immigration, the dangers of political propagandists parading as journalists, and the prosecution of police officers for carrying out their official duties. Wyatt Earp saw it all in Tombstone.

John Boessenecker: John Boessenecker is the author of nine books, including New York Times bestseller Texas Ranger: The Epic Life of Frank Hamer, the Man Who Killed Bonnie and Clyde. He has received the Spur award from Western Writers of America, the Best Book award from Westerners International, and in 2011, 2013 and 2019 True West named him Best Nonfiction Writer. He has appeared frequently as a historical commentator on PBS, The History Channel, A&E, and other media. He lives near San Francisco, California.